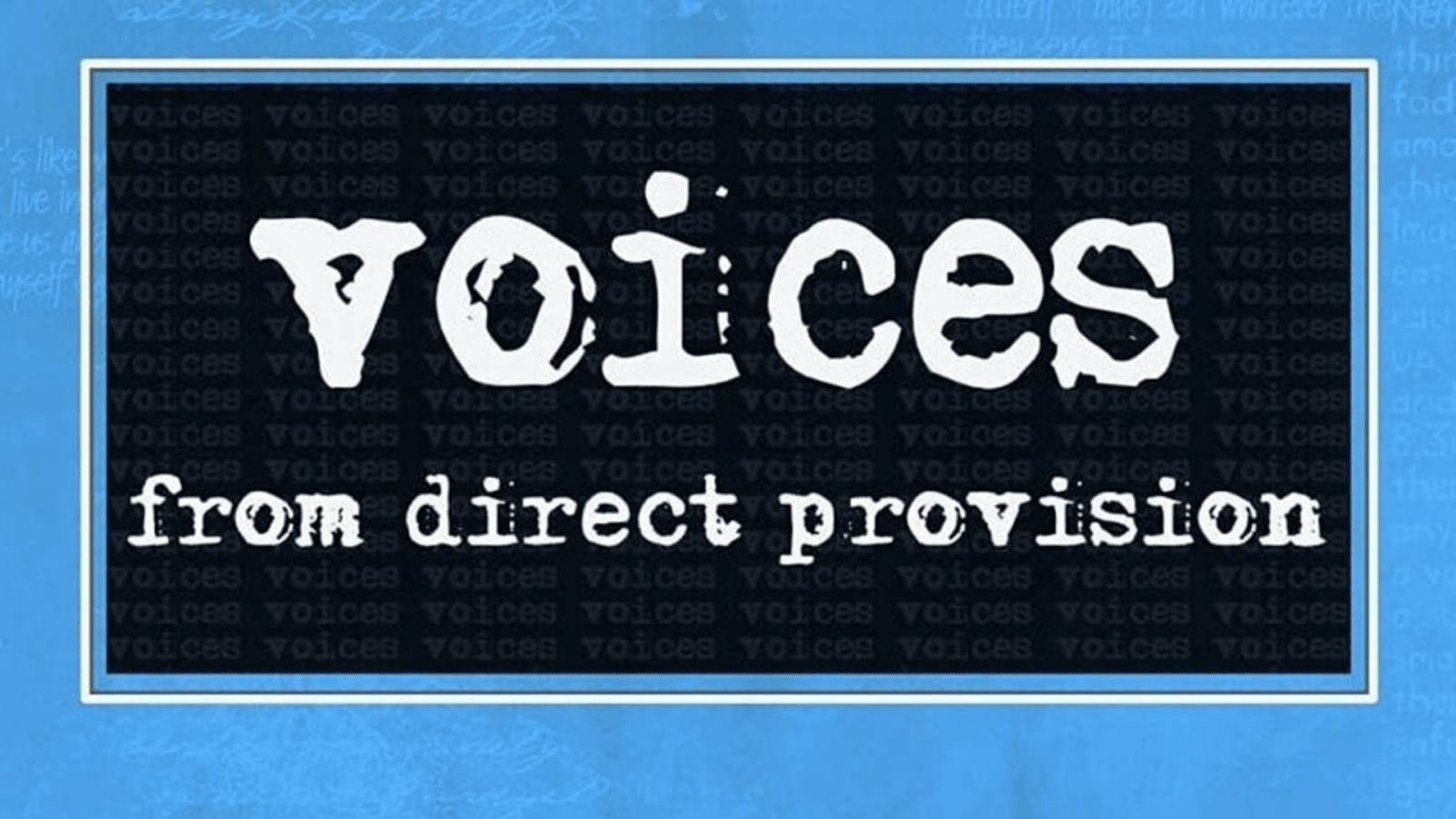 On 27 September, the organisation Abolish Direct Provision Ireland (ADPI) held an online conference titled “Voices from Direct Provision.” The purpose of the event, which was chaired by ADPI volunteer Louise, was to raise awareness about the adversity experienced by asylum seekers and provide a platform to share their stories. As well as those currently living through Direct Provision, speakers included activists and experts who shed a light on the major human rights violations perpetrated by the system. The conference was structured around three main questions; “What is Direct Provision?”, “Can it be reformed?” and “What are the alternatives?”.

The event kicked off with an informative outline of Direct Provision and its incompatibility with human rights. Karina Savchuck, a volunteer with ADPI, explained how the fundamental right to seek asylum is undermined by the lengthy and punitive nature of the Direct Provision system. Although Direct Provision is supposed to be a temporary accommodation system, the majority of residents live in these centres for years. Karina explained that asylum seekers are at risk of numerous human rights violations during their time in Direct Provision. These include the right to a private and family life, which is often undermined by crowded and inappropriate living arrangements and the right to health, which is under particular threat today due to the inability of residents to self-isolate. Karina also highlighted how, based on the broad interpretation of liberty in human rights instruments, Direct Provision amounts to arbitrary detention. Overall, the discussion highlighted the complete failure of the Irish state to protect the rights of asylum seekers.

The extent of these human rights violations was further illustrated by James, Preet and Edita, all of whom are residents of Direct Provision and bravely shared their stories. James recounted the outrageous treatment he and other residents endured from the manager at their centre. He spoke about how the manager, who is paid €100 a night per person, belittled and disrespected residents and used the threat of reporting people to RIA as a way to exercise control. Furthermore, despite the significant number of Muslims at the centre, the manager refused to let residents alter their meal times during Ramadan. This blatant attack on freedom of religious expression prompted residents of all faiths to stand up and demand their rights, however, nothing was changed. James explained how when residents complained, they were told to go and “see the Irish people sleeping outside”. James believes this kind of abusive treatment is killing people.

Preet, who has been living in Direct Provision for over two years, discussed the challenges facing LGBT asylum seekers. He spoke about how as a gay man he endured traumatic homophobic bullying in his centre. Though he reported this issue to managers, it wasn’t addressed and Preet continues to be victimised daily. Living in a rural, isolated area, he has little access to LGBT networks or resources. He explained how with no protection from harassment and with limited access to support systems, LGBT asylum seekers are disproportionately harmed by Direct Provision. Preet spoke about the toll these conditions had taken on him and suggested that an LGBT centre be set up in Dublin, where residents would have access to necessary services. Edita also shared the severe difficulties she has faced in Direct Provision, where she lives with her two elderly parents. She described the inadequate food they were given which sometimes included undercooked meat. She also highlighted the lack of access to cleaning facilities; although her centre accommodates over 150 asylum seekers, there are only three working washing machines. Edita and her fellow residents also endure cruel and sarcastic comments from the manager who, in her words, treats asylum seekers like they are bad people.

Food in direct provision is often described to be below-par with a greater emphasis on profit margins (Say No to Direct Provision in Ireland, August 2020)

Next up in the conference, there was a discussion about the feasibility of reforming Direct Provision. Eoin, one of the founders of ADPI, explained the failures of attempted reform in the past. In 2014, after a series of protests by asylum seekers, the government established a working group on the issue which published its report in June 2015. However, by 2017 less than half of the recommendations of the report were implemented. After continued campaigning and protests, an expert group was established on Direct Provision in 2019. While this group has not yet published their report, there have already been concerns about a lack of consultation with asylum-seekers. For instance, there was no engagement with the asylum seekers in the Skellig Star Direct Provision Centre who went on hunger strike in July. Eoin also highlighted that since attempts at reform began, the number of direct provision centres in Ireland has continued to grow, the costs of these centres is increasing and the deaths of asylum seekers in the system have continued. Julie Currie of Unite the Union also spoke on the reform process. She argued that the 2019 Expert Group was an unnecessary delay in progress, as the conditions in Direct Provision are the same as if not worse than those reported in 2015. Julie also warned that while a government white paper on replacing Direct Provision is due to be drafted by the end of the year, a lack of political will could mean major delays in passing legislation. She advised people to mobilise and put pressure on their politicians to make this issue a priority.

This informative discussion was followed by personal insights into Direct Provision by Nasreen and Flutura. Nasreen explained how asylum seekers in her centre were in practice denied the right to work. Her centre was in a remote area with little to no employment opportunities and due to lack of access to transport, residents couldn’t find employment elsewhere. Without job opportunities, residents were completely reliant on an inadequate weekly allowance of less than 40 euro and the food provided in the centre, which was often rancid. Despite these conditions, the managers told residents that they were taking away from Irish people who needed it more. Flutura, who is living in Direct Provision with her husband and baby, shared similar concerns about access to work and treatment by managers. She also spoke about her fears of deportation. She argued that a judge cannot decide whether the threat that someone faces in their country of origin is real; only asylum seekers themselves can know their fear.

In July, more than 30 residents went on hunger strike in protest at conditions in Cahersiveen centre, Co. Kerry (Say No to Direct Provision in Ireland, July 2020)

This informative discussion was followed by personal insights into Direct Provision by Nasreen and Flutura. Nasreen explained how asylum seekers in her centre were in practice denied the right to work. Her centre was in a remote area with little to no employment opportunities and due to lack of access to transport, residents couldn’t find employment elsewhere. Without job opportunities, residents were completely reliant on an inadequate weekly allowance of less than 40 euro and the food provided in the centre, which was often rancid. Despite these conditions, the managers told residents that they were taking away from Irish people who needed it more. Flutura, who is living in Direct Provision with her husband and baby, shared similar concerns about access to work and treatment by managers. She also spoke about her fears of deportation. She argued that a judge cannot decide whether the threat that someone faces in their country of origin is real; only asylum seekers themselves can know their fear.

Following these speakers, there was a discussion on the alternatives to Direct Provision presented by law graduate Katie Prendergast. Case studies from Portugal, Scotland and Sweden were referenced to illustrate the possibility of a humane process for asylum seekers. The key to success in each of these systems is a focus on social integration. In these countries’ asylum seekers are not shoved to the margins of society, but are given opportunities to engage with local communities. In particular, Sweden’s system allows for most asylum seekers to be accommodated in private housing, work and fully participate in society. This approach means that asylum seekers can find a sense of community and belonging while their applications are being processed. This is in direct contrast to the Irish system, where integration is actively undermined by state procedures. The importance of integration was further highlighted by Linda, who spoke about her work combatting social exclusion through the Friendship Project. This is a programme that matches local people with asylum seekers in the hopes of promoting integration and mutual cultural sharing. The project, which has now gone online, is particularly valuable during the pandemic, when asylum seekers are experiencing increased isolation and adversity.

The last speakers of the event, David and Fortune, are facing deportation after over four years in Ireland; they shared the struggles and fears and highlighted the importance of finding a support system while in Direct Provision. Fortune described the difficulties and injustice they faced throughout their journey in seeking asylum. The couple’s solicitor was confident they had a strong case, however, in her interview Fortune felt she was deemed a liar before she even spoke and was unfairly scrutinised over petty details. Fortune described the pain and fear that has persisted every day since the deportation order came and how she feels they are now only hanging on by a thread. David echoed her fears, saying receiving the letter was like someone telling you your death is prepared and you just need to get in the box and be buried. Despite everything, David reminded us that it’s not over until it’s over. He told us about the importance of being part of a community and said that showing love to other people is the only way to heal. David and Fortune are both third-year students at AIT and active community volunteers. The AIT Student’s Union has started a petition calling for Fortune and David to be granted leave on humanitarian grounds.

While there was much suffering and injustice brought to light by this conference, there was also a sense of solidarity, determination and hope. The speakers at this event were not just sharing their individual stories but were standing up for everyone in Direct Provision and coming together in the name of change. This united approach is clearly reflected in the work of ADPI and will be crucial in bringing an end to Direct Provision.