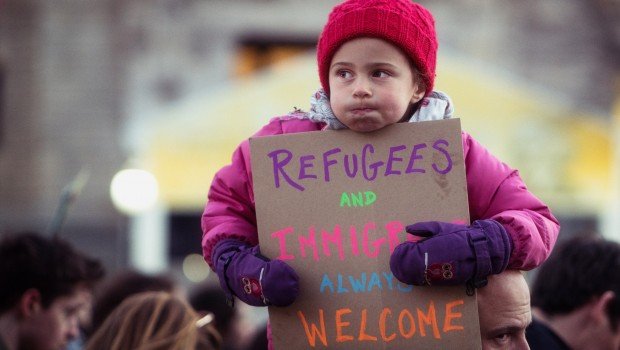 The Irish Government has failed to stand up for the 50,000 undocumented Irish in the US, who may find themselves at the mercy of Trump’s deportation threats, writes Benn Ó Hógáin (Photograph by Lorie Shaull / Flickr)

According to an oft-quoted Department of Foreign Affairs statistic, over 50,000 Irish people living in the United States are ‘undocumented’. These people, part of a larger group estimated to amount to some 12 million undocumented migrants. They have typically overstayed their visa and are thus ineligible to re-apply.

In his 2008 election campaign, Barack Obama pledged to support “a system that allows undocumented immigrants who are in good standing to pay a fine, learn English, and go to the back of the line for the opportunity to become citizens.” In 2013, the US Senate unveiled an immigration bill designed to tackle the problem, providing a ‘path to citizenship’ for certain classes of undocumented migrant. The plan stalled, however, with a lack of bipartisan support in Congress.

Obama then tried a twin set of stop-gap executive orders aimed at allowing undocumented children to remain in the US, and at keeping families together. The latter order, known as the Deferred Action for Parents of Americans and Lawful Permanent Residents, or DAPA, was challenged by Texas to the Supreme Court in June of this year. Having lost its ninth member in Justice Antonin Scalia in February, the Supreme Court issued a one-sentence decision: “The judgment is affirmed by an equally divided Court.” Politifact now rates Obama’s promise as broken, there being no hope of resolving the issue prior to President-elect Donald Trump’s inauguration.

In October 2015, NPR, the US public service broadcaster, aired a piece on the plight of the undocumented Irish. John Burnett interviewed ‘Gerry’, a 40-year-old bricklayer from Tipperary living in Chicago. Gerry had sneaked into the US from Canada some 21 years previously. He runs a masonry business with six employees, owns a house, and is married with a young child. The story highlights the everyday struggles of being undocumented: avoiding the law is a must, though Gerry is fortunate in the municipal Chicago law provides a ‘sanctuary’; information the police collect on him is not supposed to be shared with immigration authorities. More pressing is how this leaves illegal immigrants trapped as you also cannot leave the country or you will be denied re-entry.

16 years have gone by for Gerry since he last visited Ireland, and with the collapse of DAPA and the election of the candidate with a 10 point Immigration policy which includes ending sanctuary cities (through the withdrawal of federal funding to their governments). Frighteningly for the undocumented, his campaign pledges also contained the following statement: “All immigration laws will be enforced – we will triple the number of Immigration and Customs Enforcement agents. Anyone who enters the U.S. illegally is subject to deportation. That is what it means to have laws and to have a country”.

There has been a long-standing call on the part of the Irish government for the US to provide a solution to the undocumented problem. Taoiseach after Taoiseach has raised the issue with President after President, to little success. Ireland’s 50,000 undocumented pale in comparison to the 11 million, approximately 80% of whom come from Latin America. The NPR report pointed out that Irish feel ‘more accepted and less of a target’, but even they are now within the sights of Mr Trump’s immigration firing line. Despite ostensibly softening his stance in his first TV interview, focusing his plans on the deportation of those “that are criminal and have criminal records”, the team he is building around him in the White House consists of a large number of hard-nosed anti-immigration figures. The scope and impact of the Trump immigration policy may not be clear for some time yet.

This disparity, although small, is not tolerable. If Ireland wants to see a fair solution for our daughters and sons in America, then it must practice what it preaches, and press ahead with an immigration reform agenda of its own.