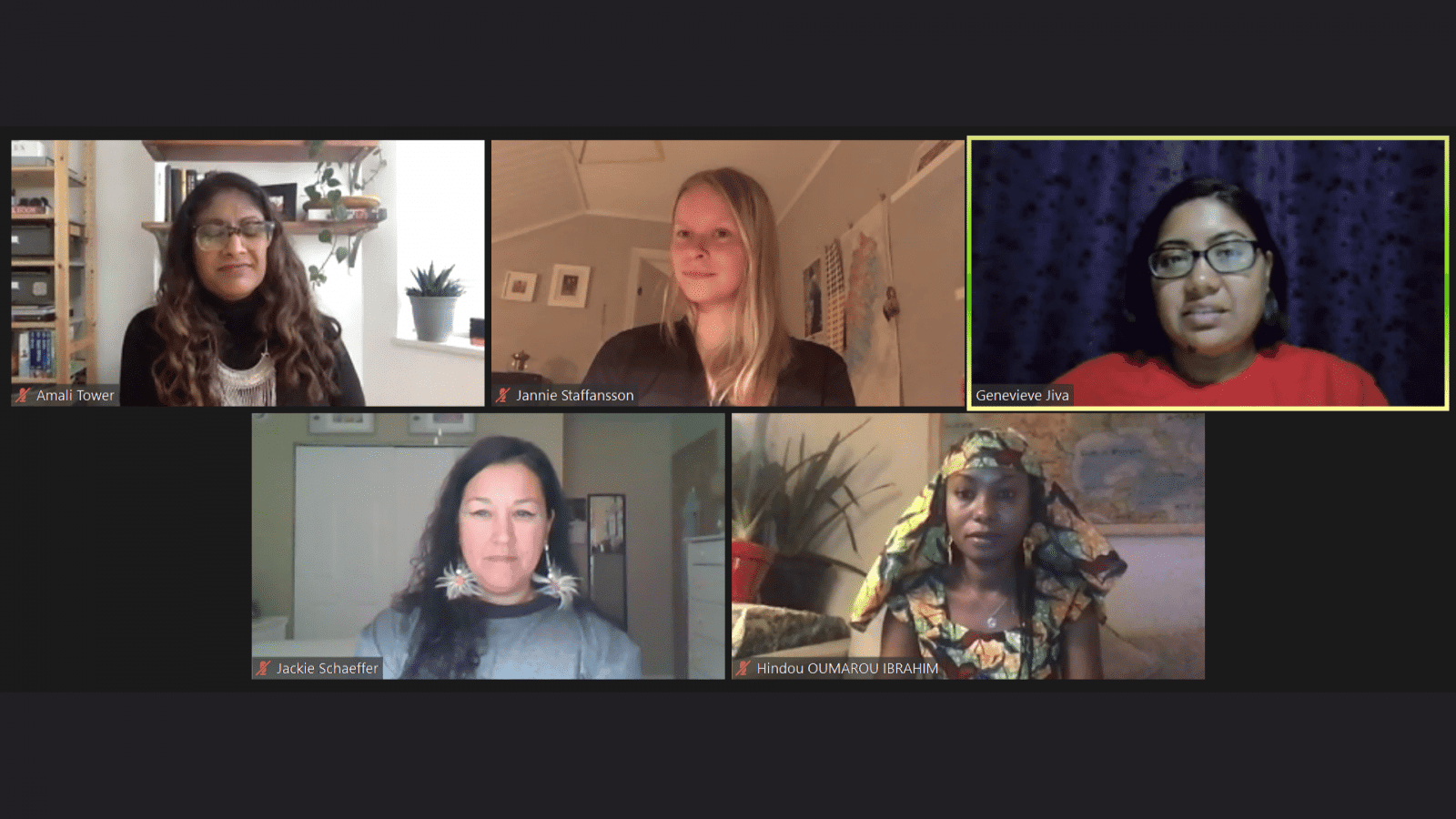 The panel members began by discussing the field of their work and their personal involvement. Jiva described her work with PICAN which, comprising 130 member organisations across the Pacific, champions knowledge and leadership into the effects of climate action on the area. The Pacific, she detailed, is considered to be at the front lines of the climate crisis, as climate forced migration and relocation align with intense cyclones, coral bleaching, king tides and sea-level rise. Staffansson, growing up in a reindeer-herding family, is seeing fast changes occurring as a result of temperature-rise, which caused many of the indigenous species to suffer. Accordingly, she decided that she would try to adapt by educating herself in indigenous knowledge to adapt to climate change.

Schaeffer, from a traditional Alaskan background, is also witnessing the suffering of her own community as a result of rising sea levels and temperatures and tries to help science and research to understand the importance of the elders’ knowledge of nature in order to help with adaptation to the new climate. Ibrahim, by contrast, coming from a nomadic culture in the Chad Basin surrounded by desert, looked back on her childhood, noting that so many of the different species of birds, insects, flowers and animals that she played with have now disappeared, mentioning that in 1960, Lake Chad measured 25km2, whereas now it only measures 2km2. Ibrahim summed up what all the panellists were working towards: “a platform at the international level to make the voices of indigenous communities heard and taken into consideration in the realm of climate change and climate forced migration.”

Schaeffer expanded on the struggles facing her community: the extreme weather variances prohibited infrastructure, due to the eternal truth in that “pitting modern infrastructure against mother nature, mother nature will win every time.” The summers are becoming hotter and longer, the winters colder and shorter, and as a people of the ecosystem, her indigenous community that depends on the land and food resources and agriculture are seeing climate change drastically affect plants and animals. However, she maintains that her people have lived for 17,000 years on the land; they successfully survived a period of time in which summer lasted all year round, and a lot more besides; so to Schaeffer, this instance is a mere “glimpse in time” which is not going to win.

“Ibrahim summed up what all the panellists were working towards: a platform at the international level to make the voices of indigenous communities heard and taken into consideration in the realm of climate change and climate forced migration.”

Staffansson emphasised that some areas that were previously untouched by colonialism were now being destroyed in favour of windmill parks, for example. She asked, “Why not put them in places where you need them, beside the cities? In places where you have already destroyed the biodiversity?… We have paid for it enough.” She acknowledged that it is difficult to adapt and survive with climate change, but to also fight as a community against renewable energy destroying her lands: while it is preferred to fossil fuels, the price should not always be paid by indigenous people and their family, lands and animals. Ibrahim agreed also that it is not just about human species, but about the ecosystem as a whole.

Jiva acknowledged that the first thing that needs to be accomplished is visibility: the Pacific is so excluded in international spaces; and if it is not seen, then how can people care? A third of the world’s oceans are in the Pacific, lined with thousands of years of culture and history, and indigenous knowledge and science in the communities that are trying to survive. She noted how often neo-colonial thinking exacerbates suffering, for example, Australia’s grand compact.

Ibrahim described the impact that the Covid-19 crisis was having on her region – the Map of Hunger 2020 showed that Chad is the most vulnerable country, with an increase by 35% of food insecurity. She finds that countries are just focusing on Covid-19, when climate change is the main issue, as it makes people vulnerable. And those that are vulnerable will always be affected more by any crisis.

However, Schaeffer found some light at the end of the tunnel: because of the basic challenges of lockdown, her community had to revert to traditional methods of traditional medicines which were then shared across regions in the state. She emphasised the community mindset of such peoples, the focus on the bigger picture.  “The western mindset is self – family – community, while the indigenous norm is community – family – self.” This has never been more relevant than in the current climate.  She urged the youth to become their own inspiration – the voice of the youth has to be powerful but it has to be acknowledged first. The young should allow elders to tell their stories and share their knowledge; inspiration will only be what they know, and they can only know what they teach.

STAND Fest 20: The impacts of climate migration among the most vulnerable communities (STAND.ie, 2020)

Jannie urged the youth to take care of their community, “spend time with your sisters, gather around the fire. Gather with your community, and if you don’t have one you need to create one and take care of it.” She pressed further: “If you are young there will come a time where you need to walk the streets and protest, for us indigenous peoples that live so close to nature, seeing everything we love dying or already dead… There is still time.”

Ibrahim called it the “youth battle, not only the indigenous fight,” imploring us not to “let them decide in your place, decide for the future that you want, and you can do it.” Jiva urged us to work as intergenerationally as possible – you can’t fix the future without learning from the past. Her final words were words that echoed the message of the entire discussion: “Get involved. You are our leaders.”

“I thought it was a very insightful discussion that really showed just how diverse and widespread the issue of climate change is. Hearing from a range of communities around the world – a rare positive side-effect of the current restrictions on in-person events – with such different cultures, such different ways of living, and such different experiences, yet all sharing the common misfortune of struggle with climate change, brings to light the stark reality of what most people only loosely understand to be a global issue.”

The unequal burden of the impact of climate change was evident to Conall who felt “hearing about the severe damage that we in Western countries cause for these communities serves as an urgent reminder that the issue of climate change needs to be brought more into the public eye; the fact that people from the places in the world that are least impacted by these issues are the ones who are making the key decisions on behalf of those who are suffering the most is awful and unjust, and listening to the accounts of the speakers added greatly to the frustration I felt with those circumstances. For that reason, I think it’s more important than ever that we educate ourselves and each other on the issue of climate change because unfortunately, we can’t easily shift the imbalance of influence so the only alternative is to cultivate an awareness and understanding of the problem in those places that are in the position to bring about the necessary changes.”

You can watch back the panel discussion above or on Youtube here. For Conall, “the simultaneous wonder and frustration that the discussion evoked are a testament to how worthwhile a discussion it was!”