01 662 1400 editor@stand.ie
0 Items
BUSINESS AND POLITICS
Pride in Ireland: Continuing the Fight for Equality 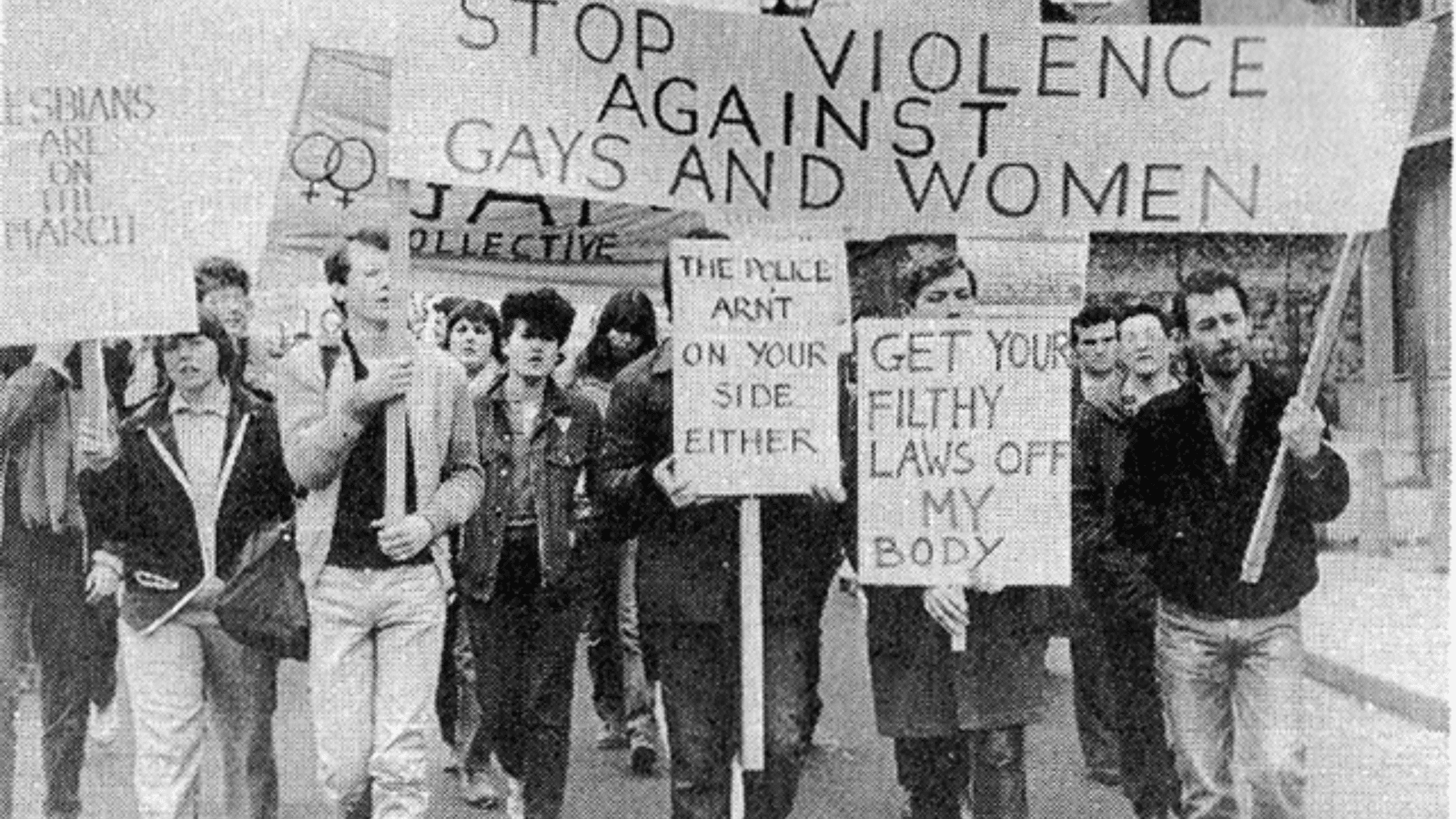 As we celebrate Pride Month, it is important to honour the pioneering achievements of early LGBT+ activists in Ireland. During the late 1970s and early 80s, a dark period marred by poverty, unemployment and the criminalisation of same-sex activity in Ireland, members of the LBGT+ community carried out several acts of resistance and defiance which would forever alter the social and political fabric of our nation.

Ireland’s first Pride Week was held in 1979, the same year the Hirschfield Centre in Dublin was officially opened, providing a much-needed safe space for LGBT+ individuals. During the 1979 Pride Week celebrations, two significant events took place; a political forum on homosexuality was held at Hirschfield, with several top politicians in attendance and an open night, welcoming members of the public to engage with LGBT+ issues which helped to dispel fears and stereotypes while furthering public discourse on LGBT+ rights. These powerful initiatives represented a huge step forward in the fight for equality, particularly through engaging with the wider community and the political sphere. This ensured that an issue which was not typically a political priority at the time remained fresh in people’s minds.

The criminalisation of same-sex activity, an unpleasant lingering after-effect of colonialism, served to marginalise the LGBT+ community in several, all-encompassing ways; many gay and lesbian individuals were forced to hide their sexuality for fear of prosecution, but also to avoid becoming social outcasts. Being openly gay at that time meant social isolation, the possibility of losing one’s job and a generally poor quality of life in a country heavily influenced and controlled by the Catholic Church’s teachings. Even our constitution casts a distinctly Christian shadow on the laws of our republic. In 1977, David Norris, a lecturer at Trinity College and founder of the Campaign for Homosexual Law Reform, began a legal challenge against the Irish State to decriminalise homosexuality. In 1980, his legal challenge was defeated, as was the appeal, with counter-arguments relying heavily on “natural law” and Christian tradition. However, this did not stop him, and he proceeded to take the case to the European Court of Human Rights. He was rewarded for his perseverance when the Court ruled in his favour, paving the way for future changes to the discriminatory laws of the time. This was the case five years later when, during Pride Month in 1993, the Dáil passed legislation decriminalising homosexuality in Ireland.

“Despite the revolution in Irish laws and social attitudes in recent decades, as well as the provision for marriage equality in our constitution, it is vital that we do not become complacent”

With decriminalisation came a new wave of political and social engagement. The National Gay Federation saw the advantage of being media savvy and were decades ahead of their time with social media and campaigning. Their use of leafleting campaigns, public picnics and the publication of their own in-house magazine were pivotal to their success. Today, social media plays an equally important role; for the first time in an Irish poll, social media channels such as Twitter and Facebook were as influential in the 2015 same-sex marriage referendum campaign as traditional media, with high levels of engagement among young people. These platforms provide a useful means of motivating people of all ages to vote. The utilisation of social media proved effective when, during that same year, Ireland became the first country in the world to legalise same-sex marriage by popular vote – a truly monumental day in the history of Pride in Ireland.

Black Pride is a very relevant global movement in the current context of the Black Lives Matter protests. It started in the 1990s as a way to provide black LGBT+ people with an alternative to the mainly white mainstream LGBT+ movement. This is a sad example of the compounded discrimination and isolation described by Russian asylum seeker and activist, Evgeny Shtorn, in a June 2019 article for the Irish Examiner. He describes the intolerable conditions that LGBT+ asylum seekers are forced to navigate on a daily basis. Regardless of the goodwill of the management in some Direct Provision centres, this type of closed environment is unsuitable for such a vulnerable minority. Many live with the fear of being humiliated, raped or attacked, and they are forced to police their behaviour, an exhausting daily routine. Many feel unable to speak about their struggles due to the fear of deportation. The fact that Ireland now has a Taoiseach who identifies as both gay and mixed-race is proof of the kind of progress Ireland is capable of making – if we can have an LGBT+ leader, then we should be capable of ensuring other LGBT+ individuals are more equally represented in all areas of our society so that they can not only survive, but thrive.

Despite the revolution in Irish laws and social attitudes in recent decades, as well as the provision for marriage equality in our constitution, it is vital that we do not become complacent. We have come a long way on our journey, but it is dangerous to think that we have reached our destination. The LGBT+ community still face discrimination in this country and many others. It is still illegal to be gay in 80 countries. LGBT+ people still face prison, homelessness, unemployment and even the death penalty in many places around the world, and this discrimination needs to end now.

A recent survey of young people in the Irish education system, conducted by Belong To youth services and Columbia University, found that as many as ¾ of gay or transgender teenagers feel unsafe in school, with many receiving homophobic remarks from both students and teachers. They see school as an unwelcoming environment for them, and they are made to feel excluded. This provides us with an opportunity for change. An important step forward is to instil a sense of fairness, justice and equality in our children and adolescents. This can be achieved through high quality, inclusive and holistic education which encompasses the discussion and normalisation of LGBT+ issues, thus creating a new generation of LGBT+ rights defenders.

This year’s Pride Celebrations have been impacted by the COVID-19 pandemic; however, according to the organisers, “Pride isn’t cancelled, we’re just bringing it home!”. Modern technology is enabling a wide range of virtual workshops, tutorials and book readings to go ahead this month, bringing the celebrations straight to people’s homes. Not even a pandemic will get in the way of determined activists!