Since 2015, the Department of Foreign Affairs and Trade and NYCI have partnered to provide the opportunity for young Irish people to participate in the UN Youth Delegate Programme. Each year, two UN Youth Delegates are chosen to form part of Ireland’s official delegation to the United Nations General Assembly. The aim of this public diplomacy initiative is to provide a platform for young people from Ireland to be represented at the United Nations, and to facilitate greater engagement with Irish youth on national and foreign policy issues. This is a unique opportunity for those wishing to get involved in developing policies that affect young people.

We got to speak to one of the UN Youth Delegates currently in this role, Diandra Ní Bhuachalla. Diandra has an open mind towards possibilities and willing attitude to try, which has led her to opportunities such as this position. She decided not to pursue a career in law after graduating with an LLB degree, and rather use her experience with advocacy and lobbying to develop a perfect mix for the position she is in today. In our Activists and Innovators Live Chat series, Diandra shared what she does and how other young people can get involved.

From a young age, Diandra has been interested in global issues and injustice. She first became involved in student activism at age 14, when she joined her secondary school’s student council:

“The student council gave me an opportunity to be involved with the organisational process of campaigns such as anti-bullying and recycling. I really enjoyed being involved in the student council which led me to apply for Comhairle na nÓg.”

Diandra’s time on the Cork County Comhairle na nÓg was particularly characterized by her lobbying on transport for young people, eventually leading to the introduction of the Leap Card in Cork, with reduced fares for young passengers under the age of 19.

Her volunteering experience with Comhairle shaped her and sparked an interest in politics. As a matter of fact, Diandra holds a Bachelors of Science in Government. During her college years, she did an internship in the New York State Assembly, which resulted in her becoming more interested in policy-making and the legislative system. Diandra believes she is “bringing political science and law together by studying a masters degree in MSC International Public Policy and Diplomacy.”

Her path to becoming a UN Youth Delegate started in 2015 when she first learned about it, though it was not until last year that she decided to go for it: “I waited until I really felt and believed I was the best person for it” (bold added).

For Diandra, being a UN Youth Delegate is a huge responsibility:

“It’s an incredible programme, you need to realise its value before putting yourself forward. There are an estimated 1.3 million young people in Ireland, which seems virtually impossible to be able to represent each and everyone of them but it’s my job to be able to represent as many as possible. As a UN Youth Delegate, you’ve been chosen to represent them locally, nationally and internationally. You have to find a balance between both forms of representation; representing your country, and representing the young people of your country.”

Being a UN Youth Delegate is a voluntary role and varies widely day-to-day, from taking calls in different time zones to late nights with stakeholders in another country. Diandra has managed to balance her duties as a UN Youth Delegate with being a full-time masters student through her incredible organizational skills. Additionally, she has been able to focus her career path by making academics her top priority: “I have now realised that to make the biggest impact and to truly help people, I need to specialise.” 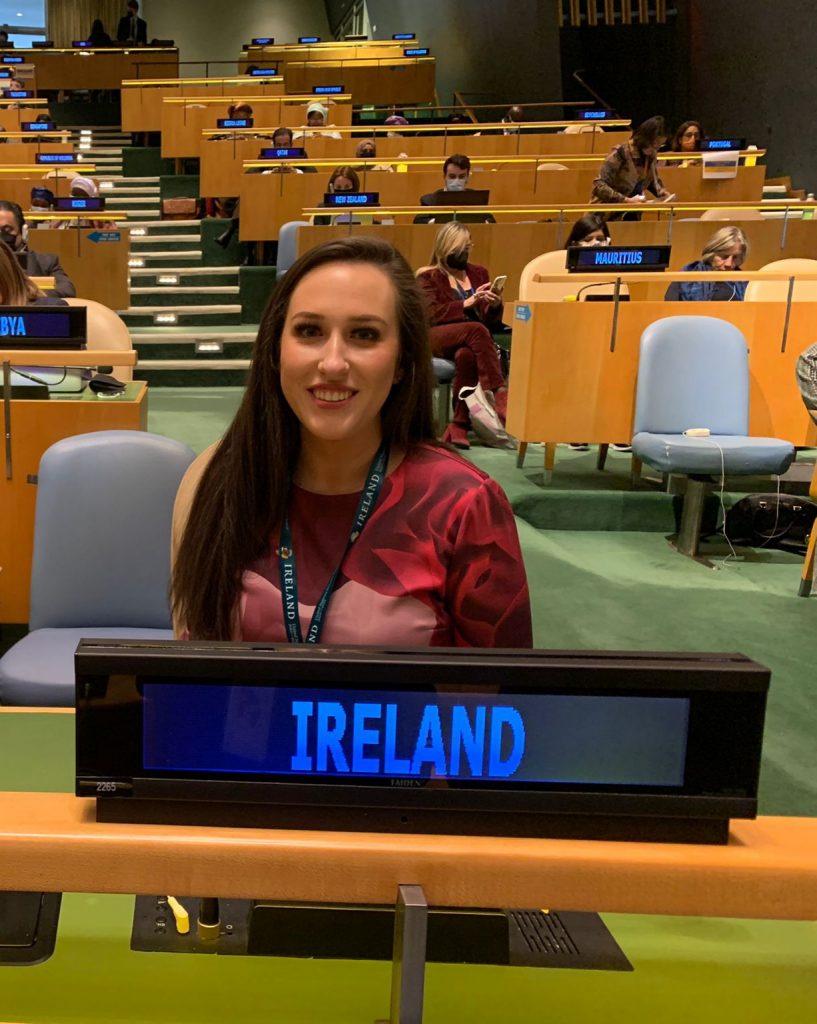 Diandra at the 66th Session of the Commission on the Status of Women in New York in March 2022.

“My main hope for the future is to have a future.”

As a young activist, one of Diandra’s main concerns is climate change: “My main hope for the future is to have a future.” As overwhelming as climate change is, she believes that we still have potential to take collective, empathetic action:

“Everyday that we allow species to become extinct, have the worst weather recorded, we allow governments to give the fossil fuel companies a free pass, the longer we are putting the future generations in danger. The WE is collective – fast fashion, big contributors, governments and fossil fuel industry. We’re not feeling it like the Global South is; the impact is felt much deeper there, where the greatest proportion of the global youth population resides. We are furthering the divide in gender, education, and inequalities by ignoring climate change.”

By being a UN Youth Delegate, Diandra represents the power of young people, and hopes to be an encouraging figure for people to follow their dreams. In closing our Live Chat, she reminded us that if young people are experiencing problems, or want to take social or political action, she can be contacted through the UN Youth Delegate @unyouthirl social media channels.

If you want to learn more about Diandra, you can check out our STAND News Live Chat on our Instagram Page @stand.ie linked here, or watch the Live Chat linked here. You can also follow her journey on LinkedIn here.

If you enjoyed this article, you can also read about STAND Contributor Niamh Kelly’s chat with Treasa Cadogan, the other UN Youth Delegate for 2021-22, by following this link.

You can find author Patricia Gonzáles on LinkedIn by following the link.

This article was supported by: STAND News and Comms Intern Criomhthann Morrison

Decarbonisation is a political and ecological project: the EU Taxonomy, gas and other barriers to change in Ireland

Roisin O’Donnell discusses a recent European Commission proposal involving the categorisation of gas and nuclear energy as sustainable, and shares perspectives on what a transition to clean energy really means for Ireland, Europe, and beyond.