Ireland has a rich and diverse array of marine wildlife, including two native seal species, common and grey. Seal Rescue Ireland (SRI) is a charity whose goal is to “rescue, rehabilitate and release native seals found sick, injured or orphaned from across the coast of Ireland”. Aoife O’Donoghue, who started as an animal care and conservation intern in SRI and has since taken on the role of donations and membership coordinator, highlighted in an interview with STAND News, how various human activities have impacted on the individual seals SRI has rescued, and also on wider marine biodiversity.

Aoife explained that “if you counted our marine territory, Ireland would be the same size as France”, and this large environment provides suitable habitats for many marine creatures, including seals. Ireland has a population of about 8,000 – 10,000 grey seals, and despite the name, a smaller population of about 3,000 – 4,000 common seals. Common seals, also known as harbour seals, have a wider geographical spread across the globe than grey seals, leading to their species’ moniker. An aid for the novice seal-watcher to differentiate between the two species that Aoife recommended is their similarity to household pets, “If it looks like a dog, it’s a grey seal. If it looks like a cat, it’s a common seal”. Grey seals are found most commonly in areas such as Dalkey and Howth, have long muzzles, and as their name suggests, have a grey coat. The west coast of Ireland is the most likely location to see common seals and this species have V-shaped nostrils.

SRI is dedicated to helping seals from around the Irish coast that are ill, hurt or left without a mother to care for them. With capacity to care for up to fifty-five seals at one time and a volunteer network of around 800 people trained and licenced to rescue seals, SRI has observed six reasons why these animals are in need of rescue and rehabilitation before being released. These causes reflect larger global issues resulting from “anthropogenic activities” (human activities influencing the environment) affecting marine environments and biodiversity, as well as Irish seals, and are listed below:

Fishing equipment such as fishing nets that are lost or broken at sea still continue to catch fish, even though the nets are no longer in use for fishing. The fish trapped within these “ghost nets” attract larger predators such as dolphins, sharks and seals. Seals become entangled with the fishing equipment and any attempt to escape can worsen the situation. The entanglements can also restrict a seal’s movement, and this, in turn impacts its ability to hunt, and can result in starvation. Also, if a plastic entanglement begins to cut into a seal’s skin, it can cause infections and injuries.

Healthy seals are usually able to fight off parasites and illnesses, such as seal pox, by themselves. Aoife explained that “poor water quality lowers [seals’] immune system, and it can turn these illnesses quite deadly”. This poor water quality also impacts the wider marine environment habitats and inhabitants. Products that enter the seas from human activities such as “pesticides, herbicides, industrial harbours with metal in them, and raw sewage points” can have a negative impact on the health of any marine creatures living in affected areas.

Seals haul out onto beaches to rest, but during storms they can become injured if they are dragged out to sea and thrown against rocks or cliffs. SRI rescue seals with “broken bones, bruises, abrasions”, and after Storm Ophelia, more seals required help from SRI than the charity had capacity to accommodate. After taking in an additional eleven seals, bringing the total being cared for to sixty-six, SRI was unable to take in more seals as they “couldn’t ensure the best quality care if [they] kept taking them in”. These seals were rehabilitated and returned to the seas, but SRI hopes to not be in such a situation again of being unable to take in any seals that require their help. Aoife pointed out that “we’re getting way more storms in the last few years and they’re actually way more intense because of climate change”, and the injured seals are one local example of the impact of a global issue. Increasing frequency and intensity of storms may place SRI and other organisations in a position of more marine animals needing rescue and rehabilitation at one time than can be accommodated properly within an organisation’s resources and facilities.

Seals can come into SRI underweight and dehydrated if they are not able to find enough food. These sea mammals then begin to use their energy reserves known as blubber (a layer of fat that insulates the seals and helps to keep them warm). Ireland’s marine environment includes cold coral reefs. These cold coral reefs provide a habitat for the seals and the fish that they prey on, and are also “essential for hatcheries and fisheries. We’re not only fishing unsustainably, but we’re also destroying [cold coral reefs] with our fishing practices” as “bottom trawlers are dragging weights across [cold coral reefs]”. The destruction of these habitats, as Aoife explains, means fish stocks are being depleted, and the way to replenish fish stocks is also disappearing, because the cold coral reefs provide an environment for fish to reproduce. A decline in fish can result in seals being unable to find food and feed

Seal pups can be left without a mother naturally, if she dies, but often if people come too close to a seal pup on the beach, the mother will choose to abandon the pup to ensure she survives to have more pups in the following years. Seal mothers will leave their pups to feed in the sea and return to feed their pups afterwards, so unattended pups are not always orphaned pups. SRI is educating the public on how to respond if they see a seal pup by itself on the beach, and ask that people maintain at least a 100 metre distance, keep dogs on leashes and to ring or Whatsapp SRI if they have any concerns. Seals are protected under both EU and Irish Law (Wildlife Act, 1976) and It is illegal to harm or harass a seal in Ireland. SRI, and their trained volunteers, are licensed under National Parks and Wildlife Services (NPWS) to legally handle seals, but will only do so if life-saving measures are deemed necessary Seal pups are monitored for a 24-hour period before being moved to the SRI facilities in Courtown, Wexford to guarantee the mother has not return to the pup, because as Aoife explained, “[seal pups] are at a crucial stage, they need to be with their mom. [SRI] do are best, but we’re secondary in care compared to a mother seal”.

Photo by Chris Parkes. A grey seal pup on beach in Wicklow. The pup still has his lanugo (fluffy white coat) so less than 3 weeks old and still dependent on his mum for milk.

SRI not only helps seals that are ill, injured or orphaned, but engages in other work such as community outreach, education and habitat restoration. Guided educational tours of the centre for the general public are offered by SRI and seal feeding enrichment experiences which provide a behind-the-scenes look at SRI’s work. These tours, as Aoife said, highlight that SRI is “not a sanctuary. All of these seals that come into our care, they go straight back out to the wild once they’re healthy and up at a good weight again”. SRI also work with other organisations such as various county councils. These partnerships allow surveys of the seal populations to be conducted and beach areas can be closed off during the pupping season if necessary. SRI also had a community outreach stall at Bloom festival in the Phoenix Park, Dublin.

Finally, the conservation centre is aiming to plant 20,000 native Irish trees before the end of the year and hosts tree-planting events. Animal care such as feeding the seals, cleaning out the pools, applying wound care, administering medications and providing enrichment are essential in SRI, but the charity takes varied approaches to achieve its goal of helping seals. Their volunteering and internship opportunities are another example of this commitment. Aoife joined SRI after completing a Bachelor of Science in biology in National University of Ireland, Maynooth and later on, a Master of Science in Global Change: Ecosystem Science and Policy in University College Dublin. She stresses, however, that people from many backgrounds volunteer and work with SRI, “if you have an education background, if you’ve marketing, media, community engagement, obviously animal care and conservation, [SRI have] all those internships”. Aoife has developed professional connections and also strong friendships through her involvement with SRI,  “but honestly, it’s the seals that are the best part. Most of them come in and they’re quite poorly, quite lethargic. It takes them a few weeks obviously, and then suddenly, when they’re starting to feel better, their whole personalities come out”. After the seals are ready for release, “they will just galumph out of their cage and there’s no looking back for them. They’re just straight out into the water”.

Thank you to SRI donations and membership coordinator Aoife O’Donoghue and executive director Melanie Croce for their support in this article.

Featured photo by Chris Parkes of Ilia Pika, a female common seal pup, with interns cleaning one of the deeper pools.

In Otter News: In Conversation with Cork Nature Network

STAND News Contributor Niamh Kelly continues her series on marine conservation issues. Emma Caulfield, a social media officer for Cork Nature Network, shared in an interview with STAND News how research and education can help to protect otters and other biodiversity in Ireland.

“On Porpoise”: In Conversation with Irish Whale and Dolphin Group

STAND News Contributor Niamh Kelly continues her series on marine conservation issues with a look into the work of Irish Whale and Dolphin Group. Read about their research monitoring habitats and tracking populations, and how ‘citizen scientists’ can get involved in protecting Irish whales and dolphins.

STAND News Contributor Niamh Kelly continues her series on marine conservation issues with a look into the work of The Irish Basking Shark Group. Their research on this mysterious fish has important implications for Irish conservation work and even tourism. 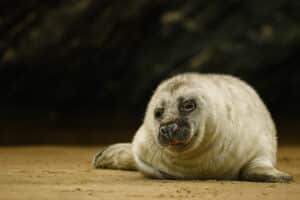