01 662 1400 editor@stand.ie
0 Items
Earth Overshoot Day and Our Right to a Healthy Environment

Criomhthann Morrison
6th of Aug 2022
For anyone interested in sustainability, climate justice, and related topics, Thursday 28th July 2022 marked two notable events – Earth Overshoot Day, and the UN General Assembly passing a resolution recognising the human right to a healthy environment. Simply put, Earth Overshoot Day tells a story of how much we’re overusing our planet. Global Footprint Network looks at what the planet can naturally generate in a year, and then compares that with what human societies are taking from it – and for 2022, July 28th is the day we hit the limit. After this day, we are taking from our reserves for next year, the year after that, and so on. Unfortunately, we have already done this for about five decades – since the 70s at least, and have progressively taken more and more. 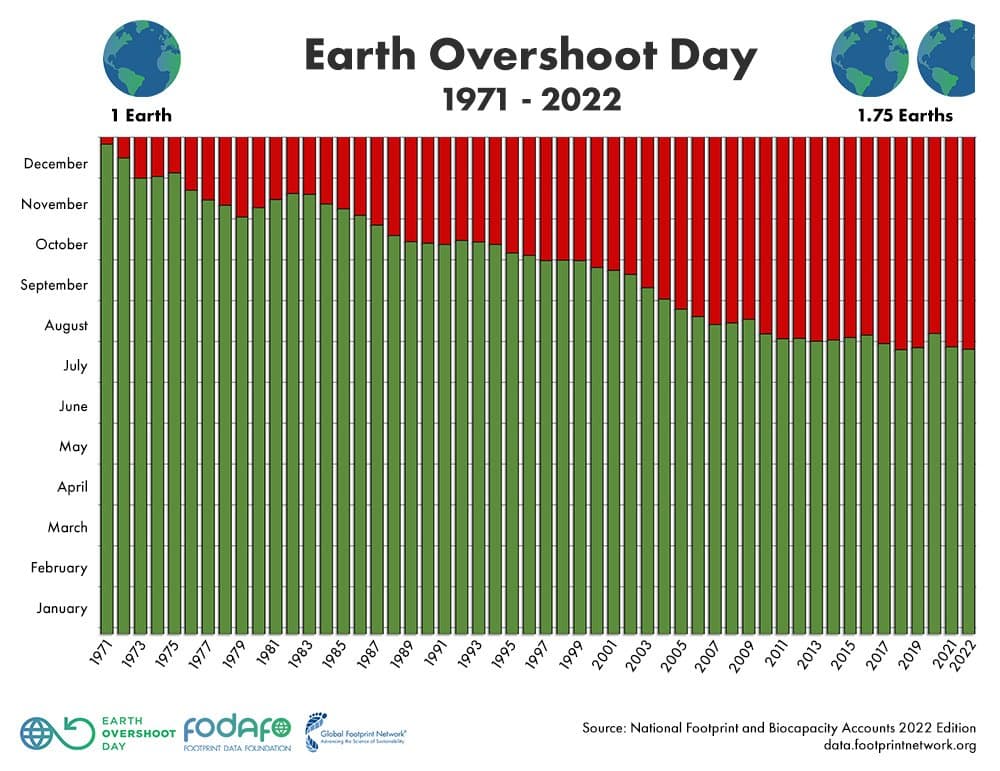 Bar chart spanning 1971 to 2022 showing increasing overconsumption of our planet, suggesting we need 1.75 Earths to meet our demands today. See Past Earth Overshoot Days for the image and more information.

The Earth Overshoot Day website highlights some solutions to help #MoveTheDate, ranging from the individual-level actions to the national- and global-level. These are relatively easy reading for people new to the topic. That said, Overshoot Day has also received criticism on several points. You can find a nice deep dive into the notion of the carbon footprint by Tammy Gan here, which is a large part of the ‘ecological footprint’ used in GFN’s calculations. Prof. Robert C. Richardson wrote a critique on the nitty gritty of the data and methods used by GFN, and GFN later wrote a direct response and a larger Limitations and Criticisms Guidebook.

“… readers most likely live in societies designed to overconsume, and have to make choices within these unsustainable systems just to get by.”

For the casual reader, here are two main takeaways: first, while it is important to consider one’s individual impact on the spaces around us, we should also be wary of individualising the problem; readers most likely live in societies designed to overconsume, and have to make choices within these unsustainable systems just to get by. Second, the ‘ecological footprint’ isn’t a perfect measure and doesn’t capture the full scale of indirect and system-level impacts of ecologically-damaging activities. It explicitly doesn’t seek to, rather aiming to give minimum benchmarks for countries and our global humanity to recognise where we are in the story, and what we need to aim for. That said, we can still use these concepts as tools in the larger conversation to help identify the roots of our problems and how we can take meaningful, informed action to address them.

It is also worth noting that Ireland’s Overshoot Day was 21st April. This means Ireland’s worse than the global average, dragging the rest of the planet in the wrong direction – rating ‘very low’ on 4 out of 5 indicators of the 2022 Climate Change Performance Index, and ranking 46 out of 64 countries overall. And in the midst of Ireland’s July heatwave, Ireland’s Climate Change Advisory Council warned that we’re not prepared for the climate now nor what’s coming at us next, soon followed by scathing critiques from multiple sides of the revealed sectoral targets for cutting greenhouse gas emissions, including not meeting the minimum targets previously set by the current government for 2030.

Alongside Earth Overshoot Day, after recent progress and similar moves across the EU and UN, the UN General Assembly, the main policymaking organ of the UN, passed a resolution recognising the human right to a clean, healthy and sustainable environment. Like the metrics used to track ecological footprints, this resolution isn’t perfect: it is not legally-binding nor does it set clear standards, among other issues, which make it difficult to keep governments and corporations accountable to it. Nonetheless, it is another major step for meaningful institutional support for grassroots and policy-level work to achieve a just, sustainable and equitable world. We should celebrate it.

Image from UN News Tweet. This shows 161 votes in favour, 8 abstentions, and 0 votes against the resolution.

This is just one of loads of other genuinely great achievements happening around the world, and there are lots of ways to hear about the progress being made. Some Instagram pages I use to keep updated on climate issues and opportunities in Ireland to learn more and meet people are @climatealarmclock, @actnow_collective, @climateambassador, @friendsoftheearthireland and @climateloveireland (who STAND had a chat with back in April). You’ll find dedicated ‘good news’ posts and podcasts among these pages and also at @earthlyeducation,@ecoresolution, @futureearth and @intersectionalenvironmentalist. While I’ve linked to every group’s Instagram page, you should check them out on other platforms you use too!

Feeling overwhelmed about the climate crisis? Check out our recent article ‘We’re Making Progress: Hope in the Face of Climate Catastrophe’ to learn about how we have already fought for the future.   Featured Photo by Ester Tuttle on Unsplash This article was supported by: STAND Engagement Coordinator Aislin Lavin.

From Wheatpaste to Home Fries: Looking Back on Climate Camp Ireland

Penelope Norman reflects on xyr experience at Climate Camp Ireland and the potential it demonstrated for building a better tomorrow.

How We Come Together: Arts and Cultural Exchange

Criomhthann writes about what he learned on three different Erasmus+ youth exchanges and training, and how to find opportunities for you or the groups you work with.

Stories straight to your inbox that challenge how you think about the world.
SUBSCRIBE HERE
Share This